In two dimensional grids of LEDs,  wiring can become excessive and complex. If two wires were to be attached to each LED, it would soon become unmanageable. However, with the use of multiplexing in an LED matrix, the problem is significantly reduced. Instead or there being two connections for every LED, there can instead only have to be one connection for every row, and one connection for every column. In a 8×8 grid this reduces the number of connections from 128, to 16. 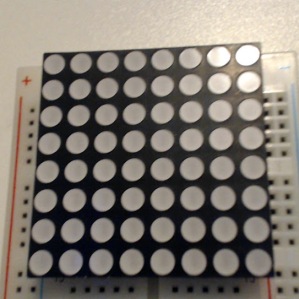 In practice, each row applies a current sequentially (one after each other) so fast that it is indisguishable by the human eye. Whilst each row is tuned on, the LEDs which are to be turned on allow current to flow out through their individual column. Because of the persistence of vision every row appears to be turned on at the same time.

The human eye retains an image for a short while after the actual image has been removed.

If the oscillations of a light turning on and off, are faster than which the human eye can detect change, the light appears to be permanently turned on.

The duty-cycle refers to the period of time that the light is turned on. If a light is on for half of the time, the duty cycle would be 50%. In this case, if the oscillations are fast enough, the light will appear to be on for the full duration of the on off cycle, but at half of the actual brightness of when it’s turned on.